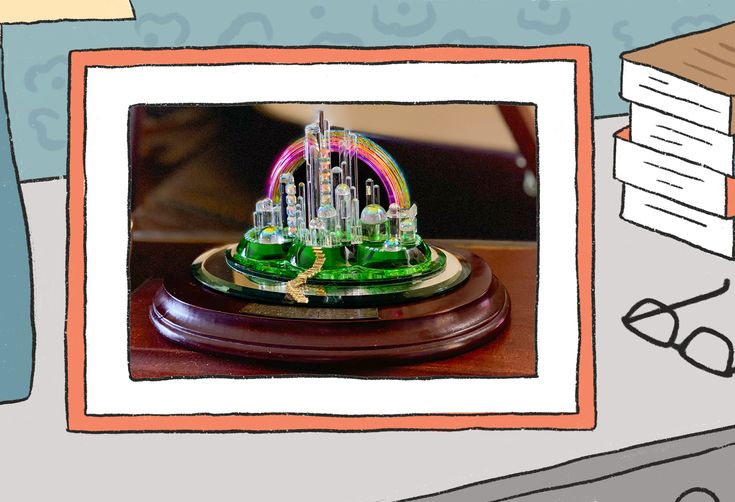 An object is often worth more than its material form. It can bring with it cultural echoes, family history, and personal memory. In The Things We Treasure, writers tell us about their most priceless possessions—and the irreplaceable stories behind them.

“I’m telling Dad on you,” my younger brother said, backing away from me. His elbow brushed against the bamboo reeds that lined the pond’s rim.

I was holding up the koi by its tail. It was half as long as my arm and shiny as a new penny. And dead.

“I—” I said, accidentally shaking the fish so its body kind of wiggled. “I just found it like this, I swear.”

We were in my great uncle’s sprawling, discombobulated garden—with its oaks, tomato plants, an antique tractor, cucumbers, chicken wire, wildflowers—Beverly Hillbillies in a town forgettable as Franklinville. At its center: a koi pond, fifteen-feet deep, filled with mud instead of concrete to make it look more “natural.”

These were my summer weekends. Nine years old, I became Judy Garland at the edge of the pond’s swampy water, trying to decipher this new, strange world. Lethargic and hot, I spent hours trying to catch the koi, copper shimmers gliding beneath a haze of mud. I chased them with my hands while my younger brother sunbathed out of sight in his bathing suit and boating hat, a cartoon of himself with a thick white streak of sunscreen down his nose. My father took care of the landscaping, mowed the lawns.

These were my summer weekends. Nine years old, I became Judy Garland at the edge of the pond’s swampy water, trying to decipher this new, strange world.

“Please don’t tell, not yet,” I said, still holding the fish, its whiskers dangling. Wind trickled through the hickory, jostling the barbed leaves. “You have to help me.”

He adjusted his chunky blue sunglasses. “Help you do what?”

A useful rage came over me. I moved closer to him, raising the fish even higher. “If you don’t help me, I’m going to hit you with it.”

He jumped back. “It reeks!”

“And then I’ll tell Dad that you killed it,” I added, my confidence growing.

We could hear the distant riding mower making its rounds across the front lawn, forward and back, nearer then far again. Our father always mowed the front first, then moved to the back. We had maybe a few minutes.

“Fine,” my brother said, shaking his head. “Where do you want to put it then?”

“Mom flushed Teddy Jr. down the toilet that one time,” he said, trailing off. “I miss Teddy Jr. a lot actually. Teddy the Third is fine but he’s not the same. He only seems to notice I’m alive when I’m sprinkling fish food into his water.”

We decided. The breeze, the hickory, the sun bearing down, we ditched the pond. I held the fish behind my back as if not to appear suspicious to the bluejays darting between trees. The riding mower roared distantly. We moved, steadfast for the toilet, across the acre toward the house we’d been avoiding all afternoon.

In 1988, my great uncle settled with the state of New Jersey for north of 12 million dollars, the largest personal settlement in the history of the state at that time. Half of this went to his pro bono lawyer. Most of the other half, over the next decades, he used to stay alive—surgeries, live-in medical care. What was left after that filled the rooms of his life.

He bought a three-foot Pequod encased in glass. A four-foot Titanic. He bought an extra fridge for the basement and then cases of Dom Perignon to fill it. A black 1941 Oldsmobile. A thirty-something Model T rigged to be a roadster, raccoon tail tied to the antenna. A ’66 Lincoln convertible like the one Kennedy was shot in. A new house, a big deck, a pole barn in the back for the farming equipment he’d never use.

“Come give me a kiss,” my uncle said from his bed. My father unclipped the urine bag that sagged at the sideboard, then disappeared to the hall. My brother looked at me with a face that said, Not me.

Afraid and acting, I puckered against my uncle’s cheek. His long whiskers grazed my face. The cigarette smell nearly knocked me back.

“Tickles, huh?” He laughed, a bit of gravel in his throat.

It wasn’t his beard I was afraid of. I only knew what I’d been told, which wasn’t much, but I was beginning to put it together. There were things that could happen to you that you couldn’t control. You could spend the rest of your life in bed, not because you were tired. My dad, smelling of grass, told me to be kind.

When it was raining, or when we were waiting for lunch, I’d recline in the La-Z-Boy in my uncle’s room and assess the inventory: two rotisseries stacked in the corner, a contraption that diced onions with the press of a palm, collectable metal trains, small tubs of Nickelodeon slime, custom football jerseys, Shrinky Dinks, shoes that lit up when you stomped in them.

And then, on the high shelf: a crystal figurine of the Emerald City I didn’t know would eventually be mine.

It would follow me through five states, break and then, once glued back together, break again. The rainbow dislodged when a friend hooked their finger beneath it and lifted, asking, “Where on Earth did you get this?”

We were all from nowhere more or less, my family, even my uncle with all his sudden money—nowhere being, of course, a highly specific place arranged to keep you there. Our home turf of South Jersey: A tidal marsh, a patch of woods named for its inability to grow anything but pitch pine, the forest floor littered with garbage, the old cemetery a Superfund site, closed indefinitely for “environmental investigation.”

But the crystal City, now that wasn’t from nowhere. Even I knew that.

We leave the room, we get busy, we forget. I’m thinking about this twenty years later in the rain in Melville’s Nantucket. The water is gray and turbulent and full of crabs, jellyfish, bioluminescent plankton that flare when the water stirs. No Pequod, but I can imagine it on the water’s far horizon.

Now I know the random cruelty of my uncle’s arrangement. He had been arrested for a traffic violation. Because he could not make bail, he was sent to the County Jail, where he was placed in a dormitory cell along with nine other men. One of these men was awaiting transfer to a state facility and had been involved, at that point, in several violent attacks on other inmates.

I want to imagine my uncle rolling over in the night, saying some wisecrack that spurred the cellmate’s anger. Want to imagine some spark of humor and wit before the descent of violence.

By the end of the night, the cellmate had broken my uncle’s neck. He lay on the floor of the jail for hours before the prison guards placed him on a stretcher and carried him to the jail’s infirmary. There, he was handcuffed and shackled before being taken by ambulance to the hospital. I don’t know when he learned he’d never walk again. He wouldn’t. He couldn’t lift an arm to feel the wind in the back of his own Lincoln, top down, my father speeding through town.

What Studying Abroad in Edinburgh Taught Me About Coming Out

“It’s not going down,” I whispered beneath the bathroom door to my brother who was keeping guard in the hall.

The back door whined opened and clapped shut to the sound of our father’s boots moving across the kitchen.

Frantic, I jiggled the toilet handle again. The toilet water gurgled and started to overflow. The koi’s tale had gone half down but the thick torso was too fat and got stuck. It stared back at me from the bowl, its whiskers once again swaying underwater.

“Why are you sitting in front of the bathroom door like that, C.” I heard our father say.

“I didn’t do literally anything,” my brother said. “It’s all Max’s fault.”

“Hey, Max,” our father said. He knocked on the door. “What’s going on in there?”

The more I jiggled the handle the worse my situation became. My sneakers squeaked in the puddle forming around the toilet, the pedestal sink. I was too ashamed to look up at myself in the mirror and too ashamed to look down at the koi. This was not at all like flushing Teddy Jr., I wanted to yell at my brother.

My father kept knocking. “Open up.”

Defeated, I lowered the toilet lid. I unlocked the door.

He lifted the lid while I cringed.

“Oh,” he said, muffling a laugh, which didn’t make sense to me. “Very, interesting.”

“Why don’t you go sit with your uncle for a bit,” he said, squatting down to hold my shoulders.

We were all from nowhere more or less, my family, even my uncle with all his sudden money—nowhere being, of course, a highly specific place arranged to keep you there.

I moped down the hall. I sunk into the La-Z-Boy in my uncle’s room. He was asleep and snoring. I had no idea I was sitting inside a life. A life, with its artifacts and stories—Moby-Dick, the Wizard, model trains, tiny, hand-painted airplanes. Many of them were emblems for what they were not, vessels to somewhere else.

I sat there, thinking about the koi, the fragile ornament of its body. Its death hadn’t been my fault, I know this now. But I felt in my chest what it might’ve meant to my uncle as a thing, unique among his many, whose whole purpose was to move on its own, a slow flash of molten in the dark and murky pond.

And if you had entered that room after I had finished sulking, you would’ve seen a boy quietly ransacking the bureau drawers to find pen and paper, to begin to write in poor handwriting: “Dear Uncle, I’m sorry.” And if you had gone back the next week, you would have noticed the Emerald City had been moved from the high shelf to sit on the bureau, waiting. One of the thin bars of sun thrown by the blinds made it glint.

“Do you like that? Do you want that?” my uncle said.

Had he seen me staring at it? What had my father told him? I didn’t know. But I took it, that little glimmering piece of elsewhere that now, all these years later, reminds me of where I’m from. I thanked him. I kissed my uncle.