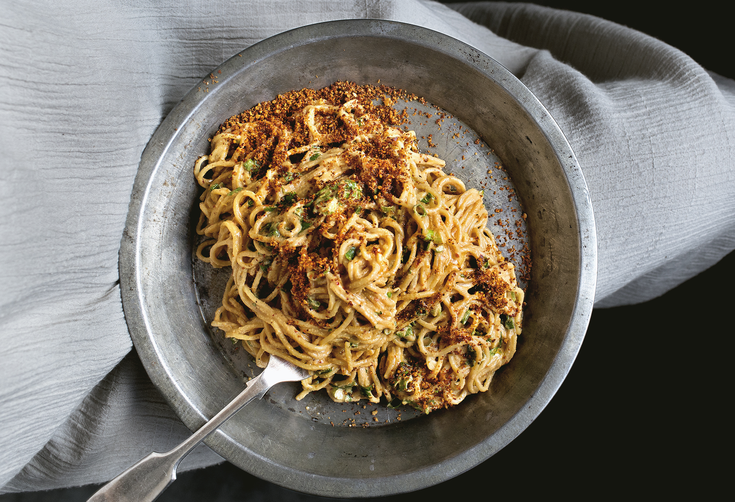 Writer Mandy Lee, whom you might know from her blog, Lady & Pups, is one of our favorite recipe developers and storytellers. In her debut cookbook, The Art of Escapism Cooking: A Survival Story, with Intensely Good Flavors, Mandy shares about her journey moving from New York to Beijing—a new home she didn’t really like, but wanted to accept because her husband’s job brought her there—and how cooking was the only thing that helped her cope with the transition. The following excerpt (plus, three delicious recipes) from The Art of Escapism Cooking is about the kind of food Mandy loves to cook when she’s by herself.

When I first arrived in Beijing, I was blissfully excited. Undeniably, a city cloaked in complicated ancient history, much of which is beautifully mysterious and some of which is evidently dark and savage, should be a pulsating magnet for anyone who is the least bit curious about the world at large, including me. Not to mention my adoration of the foods I found there, which obviously inspired many of the recipes in my cookbook. I swear that I went to Beijing with my best effort at an open heart.

But ultimately, for lack of a better way to put it, a dick is a dick.

In fact, due to my general reluctance to say Beijing on a regular basis, I like to and often do call Beijing by the nickname I chose for it—Richard, derived from a proto-Germanic root meaning “hard ruler.” But more importantly, Dick for short.

My relationship with Richard went by in a heavy daze. My mind was crawling with questions, but my body retreated into detachment. Many nights I had the urge to scream at him, but instead I sat silently on my bed, in frozen acquiescence. Each morning I opened the curtains to a smoky sky and saw his face, then simply closed them again. We started to fight a lot. There were often, on my end at least, tears of extreme disappointment, from hurts that we couldn’t and didn’t want to take back. The relationship between Richard and me grew cold, stagnant, yet there was turbulence underneath.

I became less willing to go outside. Even when I made an effort to do so, more often than not I returned home mute, in a wordless smolder. On a sweltering summer day in which both the air and the soot inside emulsified like a cream soup in a blender, I found myself once again trapped in a cab and cornered into agreement on the touchy politics between Taiwan and China, something I considered emotionally equivalent to an assault.

Had he ever loved me? I wobbled home, pinned by emotional splinters, while on TV some travel-show host was grazing on cacio e pepe in the mockingly beautiful city of Rome, seemingly in another universe. In eerie silence, I floated into my kitchen…and came out two hours later with my very first, handmade fresh tonnarelli (think fat spaghetti).

That…that was the beginning of my breakup with Richard.

For the record, the pasta didn’t taste like salvation, but more like rubbery tubes with an extra snack of mockery. It sucked. But that moment was the turning point in our toxic relationship. Despite how silly it may sound, measuring my level of mental stability by how I feel about making fresh pasta at any given moment is an accurate, scientific, and time-honored tradition.

Many years ago back in New York, I tried making ravioli for the first time, and it failed in the same unmistakable fashion, so I, as any other healthy, internally fulfilled human being would, simply stopped trying. However, this time, as I looked around at the emptiness where I stood, with Richard smiling creepily on the right…I turned left.

I started to cook more. Not just more frequently, but more obsessively, desperately, like a leech on open flesh. A new recipe could fail once, fail twice, fail compulsively to no apparent end—it didn’t matter. I took is as good pain. I took it as refuge. I would rather fixate on something else—anything else—than the constant inner antagonism I was living with. I dove deep into books on pasta making; plowed through a dozen adjustments with variations on flour, yolk, egg white, and water ratios; was cooped up for several weeks of voluntary confinement before eventually emerging again, dangling a handful of tonnarelli that I was finally happy with. And after that, I jumped right back in for the next escape.

The Magic French Onion Soup I Moved to Paris For

Cooking had become a hobby, but slowly it became a drug, and then an addiction. I’m not saying it was healthy, or that I was proud, or that any of this was a proactive or even justifiable outcome of my violent contempt for my surroundings. I could have gotten a job. I could have become an activist. Since I stayed, I could have fought. If I’d wanted I could have picked up and left. But I didn’t. I just cooked.

Early in my addiction I snorted recipes that took hours, but before long, I started shooting up cooking projects that took days. I began to make breads, with microorganisms that farted gasses in my kitchen, and together we joked about what it was like to have big holes in our hearts. I even started to bake pastries, reconciling with an activity that had sent me into a deep state of worthlessness via a few muffin-making sessions in my college years, episodes that are best forgotten entirely. I began to try my hand at charcuterie, which gave a high that often stretched on for weeks, if not months, plus a delicious withdrawal that tasted like summer in a French chateau. Fortunately or not, it is extremely easy—too easy—to buy cooking ingredients online and have them delivered to your doorstep in China, and because of that, I could go on fussing with recipes for days on end without ever leaving the apartment.

Sometimes I forgot how long I stayed inside. Sometimes I lied about having gone out.

And that can’t mean anything good. But for me it was a matter of survival, of staying sane. I cooked like a self-loathing desert ostrich burying her head under an endless terrain of sand, and before long, this method of survival began to taste like delicious noodles in intense broth and flaky buns that crumbled in denial. Looking back, I’m not sure if how I dealt with my situation was shameful or glorious. It felt passive at times, but also empowering. It didn’t shrink Richard, but I grew bigger in size. Two years into it, in 2012, sunk deep in my mental exile next to a stack of recipes growing restless at my passivity, I finally did the unspeakable.

I started a food blog.

Despite my escape into cooking, I don’t cook for myself.

Or at least, not the way it looks on my blog or in the rest of this book outside this section. I don’t know how it reflects on me as someone who’s selling recipes, but in my view, cooking and eating are two very different, entirely separate areas of investigation. Cooking, to me, is about curiosity, the insatiable need to know beyond necessity, the compulsion in the process of unwrapping a question, rephrasing it again, moving on to the next, the hunt.

I rarely find enthusiasm in repeating the same recipes, answering the same questions. But I can eat a select few of the same things over and over again. These things don’t involve a lot of thinking and rationalizing; they aren’t even bothered by common decency or responsibilities. I eat them free of my own judgment.

Here are three of the dishes that I cook for myself and enjoy repeatedly, starting with the best, most life-changing spicy cold peanut noodle dish I’ve ever tasted.

What recipes helped you get through a tough life change? Let us know in the comments.
Source