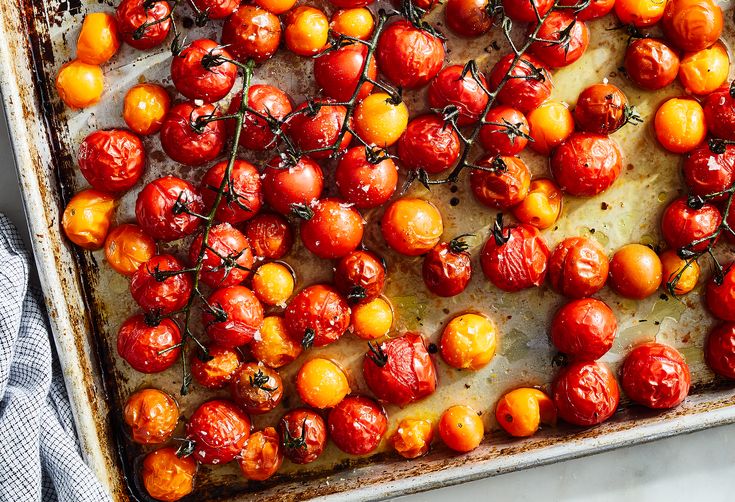 Just a month or two ago, East Nashville, where I live, was invaded by tiny, sweet, drought-immune cherry tomatoes. First, they overtook my carefully planted beds of native flowers. Then, I noticed them sprouting up along sidewalks, and learned from friends how their lawns had been similarly conquered. Newly ripened tomatoes burst from the vines daily, but there were only so many that I could eat and give away. I had to find something to do with them. I threw the delicious trespassers into salads, packed them for my child’s lunch, and gifted them to his teachers. I couldn’t get enough.

Now that the first frosts have begun to hit the tomato vines in my yard, and the jammy little fruits are no longer growing abundantly, I still crave them (somehow). Luckily, they’re still widely available at my local grocery store; unlike their heirloom, beefsteak, or Roma cousins, cherry tomatoes grow exceptionally well in greenhouses. This means I can enjoy them far into the chilly winter, when I’m looking for a bit of brightness.

Just this summer, I was introduced to my new-favorite way to eat cherry tomatoes, which I plan to incorporate into my year-round cooking routine: Adeena Sussman’s roasted sheet-pan rendition, from her vibrant cookbook, Sababa: The Fresh, Sunny Flavors of Israeli Cuisine. Like many of the recipes in the book, this one calls for only the most essential of ingredients—cherry tomatoes, olive oil, salt, and pepper. These, together, add up to an intensely—and unexpectedly—rich and flavorful dish.

The secret here is in the preparation. By blasting the tomatoes under high heat in the oven, they shrink and caramelize, and the umami-packed condiment that emerges is a wonder. Sussman uses this shortcut-tomato jam to crown extra-thick and tangy labneh, as a topping for homemade hummus, and to rev up a plate of pasta.

The recipe captures the essence of the cookbook—an ode to Israel’s abundance of fresh produce, plus unfussy ways to make them sing. A veteran food writer, Sussman has co-authored a number of critically acclaimed cookbooks with such high-wattage figures as Chrissy Teigen. Sababa is her first solo effort, and in it, Sussman’s made simple, bold recipes her signature.

This dish, for example, has nothing more to it than spreading cherry tomatoes on a sheet pan, seasoning them with olive oil, salt, and pepper, and giving things a good shake to distribute the seasonings before popping the pan in the oven. The one thing to watch out for, cautions Sussman, is to make sure not to over-roast the tomatoes. You’ll cook them until they’ve released only some of their juices; they should still be quite juicy and not at all resembling sun-dried tomatoes, with lots of water left in the pan. That liquid, full of concentrated tomato flavor (and pectin, a naturally occurring compound that makes fruits and vegetables jammy when heated), will thicken as the tomatoes cool.

As for me, I’ve been smashing the sweet roasted tomatoes onto burgers, upgrading workaday egg-and-toast breakfasts with a big dollop of the sauce, and adding spoonfuls to brothy soups for a bright hit of acid and color. Once roasted, the tomatoes last for a good week in the refrigerator, so it’s easy to perk up any kind of meal on the fly.

My one tweak to Sussman’s recipe—over the many times I’ve made it—has been to add a generous amount of garlic to the pan, pre-roasting. But there are times when you want to cook without having to use a knife at all, and that is part of the beauty of this do-it-all dish.

How would you use these roasted cherry tomatoes? Let us know in the comments!
Source