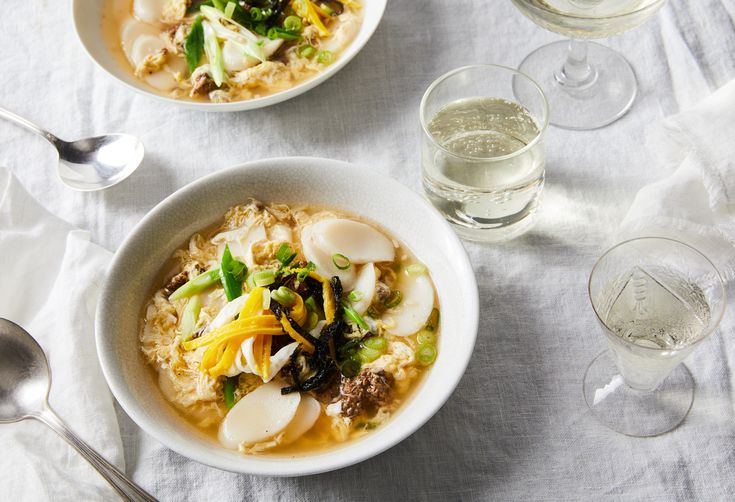 The Lunar New Year falls on Jan. 25 this year. It’s a momentous occasion celebrated by millions around the world, and we reached out to some of our friends to see how they’d be ushering in the Year of the Rat. Eunice Byun and David Nguyen are the food-loving co-founders of Material, a thoughtful kitchenware brand that always keeps the home cook (like us!) in mind. See how they honor their respective Korean and Vietnamese cultures during this special time of year.

There is, for me, no better way of ringing in another year than with family and good food. This is the very reason why Korean New Year (or seollal) is one of my favorite holidays. From the communal meal prep to the ceremonial bowing to elders (sehbeh) to the lively game of yutnori (where sticks are thrown in the air like a game of dice—and trust me, it gets rowdy with my family), I love the sense of togetherness and tradition that comes with every Lunar New Year’s gathering.

Over the years, our celebrations have ranged from throngs of family members to simply my husband, daughter, and me, but two things—more specifically, two dishes—have remained constant staples of every seollal.

Dduk Guk: Perhaps one of the most traditional dishes in Korean cuisine, this rice cake soup is served on holidays like the new year, and also enjoyed year-round (including on my birthday, because I love it so much). The white color of the rice cake symbolizes starting afresh, and its shape resembles coins for prosperity.

Mandoo: My favorite thing about Korean dumplings is not the final dish itself, but the act of making them. Some of my earliest (and fondest) food memories revolve around preparing mandoo. My mom would take a large bowl and knead together meat with finely sliced vegetables and seasonings. She would place the mound of filling in front of my sister, aunts, cousins, and me, and we would all get to work.

For the next two hours, we would fold, stuff, and arrange dumplings while chatting, laughing, and peering over at my mom who was busily steaming batches of mandoo. While the reward was great (perfectly chewy and savory dumplings), the experience of making something together was even greater.

As my daughter is now at an age where she can understand and appreciate some of these traditions, I cherish these memories and rituals now more than ever. The beauty of traditions like those that my parents brought with them from South Korea to Kansas, and then to Texas and California, is that they are meant to be passed along, generation to generation. So, as we celebrate seollal this year, our home will once again be filled with friends and family, wafting smells of dduk guk boiling on the stove, and intensely competitive games of yutnori in the background. I wouldn’t have it any other way.

How to Make Dumplings Without a Recipe

Tết, the Vietnamese New Year celebrations, created a kind of magic in my life as a kid. In the days leading up to the new year, my normal suburban Southern California home somehow became more alive, more vivid, and more real.

Extended family and friends (more than I could count!) would come over, with some dressed in brightly colored, traditional silk áo dài. Adults would give us kids red envelopes with money folded inside. In exchange, we wished them a long life, success, and happiness. Foods that I only saw once a year appeared, such as bánh chưng, a savory concoction of pork and mung beans wrapped in sticky rice (see how it’s prepared below).

Little trays of candied lotus seeds were placed around the home and the smell of the incense burning lingered in the background. All of this created a shared feeling among us that Tết was the most important time of the year, and the days ahead would be the most special ones.

Today, the Tết traditions hold a different kind of magic for me. They build a bridge between my Vietnamese-American identity and my family’s heritage. It’s a bridge that doesn’t get built as often as I’d like.

For a moment, I share the exact same experiences as my parents, grandparents, and great-grandparents did when they were my age: the same giving and receiving of red envelopes, the same sharing of the bánh chưng, the same lighting of the incense. These traditions link us to the exact same time: Tết. As American playwright Tennessee Williams wrote, “Time is the longest distance between two places.” And for a moment, there is no distance between me, my family, and my heritage.

What were your Lunar New Year celebrations like growing up? Let us know below!