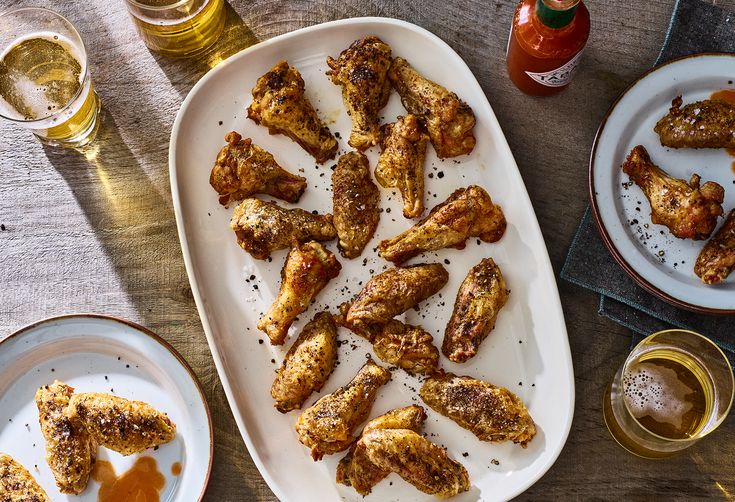 This 21st-century appliance has been making waves (big ones! watch out!) for nearly a decade. In 2010, Phillips debuted its first model, boasting that “air is the new oil.” At the end of 2017, Pinterest put the air fryer at the top of its 2018 food trends.

Here we are, a decade later, still air-frying.

My brother bought one years ago and has been raaaaaaving about it ever since. He uses it for anything and everything: potatoes, corn on the cob, sausages, chicken wings. (He reminds me of F52 contributor, Ben Mims, who also delights in putting anything and everything edible in his air-fryer: okra, shishitos, pork ribs, even brownie batter.)

But mostly, my brother talks about his chicken wings. These, he swears, are the best, best, best. And all because of the air fryer. Or so he says. Let’s put his method to the test. But first, some FAQs.

What the heck is an air fryer?

Basically, it’s a mini, countertop convection oven. If you aren’t sure what a convection oven is, join the club. They aren’t common the United States, so many people are unacquainted with how they work, which is essentially a little fan blowing hot air in a sealed box. Seriously. That’s it. The fan blows around all the hot air, shooing away steam and fostering faster, evener cooking. In other words: better coloring, crispier crusts than you would get with a regular oven.

Ding ding! It isn’t. Hence my skepticism. By definition, frying means cooking in hot fat. But the lure of the air fryer is the exact opposite: cooking in little to no fat. You pull out the drawer, usually with a grate-like tray inside, prep with non-stick cooking spray (if you want), add food, and done. Air roaster would, technically, be more accurate, but air fryer sounds so much better, right? Have your French fries and eat them, too!

This goes back to the, Is this really frying? question. The big difference between frying and air frying is the lack of fat. Frozen, ready-to-bake French fries do well in the air fryer—because they’re already fried and bring the oil with them—but freshly cut potato wedges, with their lack of fat, do not. Wings, with their high skin-to-meat ratio, are brazenly fatty. So, yes, we are air-frying with no extra fat, but we’re only able to do so because there’s already enough schmaltz to go around. It’s the same reason buttery pastries, from pie crusts to croissants, bake up so beautifully in a convection oven.

Okay, okay, tell us already! How were they?

If you’re a younger sibling, you know how much it pains me to say this, but: My brother was right. I was wrong. These chicken wings were the best: colorful and crispy outside, juicy and tender inside, and all without a lick of additional oil. What’s more, the simplest preparation (really, just salt and pepper!) turned out to be my favorite.

2) Pat the chicken wings dry with a paper towel. Water (and hence, steam) is the enemy of crispness. Make it rain—scratch that, make it pour—salt and pepper. Add the seasoned wings to the air fryer.

3) Cook for about 25 minutes until golden-brown and shatteringly crispy. Because they’re naturally fatty, I didn’t even need to grease the fryer tray. And well, that’s the entire recipe.

I tried flipping halfway to promote even cooking, but found that opening the door was more damaging than it was worth, and the circulating air has the even-factor covered anyway. I also tried dredging the wings in cornstarch, a go-to frying technique, but this works better when extra oil is involved, and a pseudo-battered crust can form. In the air fryer, the cornstarch simply turned pasty.

But what about the sauce?

For some people, a wing is not a wing without sauce. There are a couple ways to go about saucing your air-fried wings:

Mid-fry. When the wings are just about done, remove them from the air fryer, dunk them in warm to hot sauce (temperature-wise), and return to the air fryer. You don’t want them to bake with the sauce too long, lest it burn. This method yields a sealed, shellac-like crust. It also makes a huge mess in your air-fryer, which is why I prefer…

Post-fry. When the wings are done, remove from the air fryer, and dunk in warm to hot sauce. (If your sauce is cold, you’ll immediately lower the temperature of the wings, which isn’t what we’re going for.) Serve immediately before things get too soggy.

Here are a couple of favorites:

And try subbing air-fried wings into these recipes:

These were the best chicken wings I’ve ever made—and effortlessly at that!—but there are a couple caveats. It goes without saying, an air fryer (even a larger model) is significantly smaller than your oven. I could only fit 9 in a single layer, which is crucial to that crispiest-ever crust. (You know how recipes always say to not crowd the pan? Same idea.) Which means, if you’re serving a crowd, you’ll have to do batches. Like, a lot of batches. At the same time, it’s still a large appliance! In fact, it’s bigger than any appliance I own. If you live in a small kitchen, with limited storage space, this could be problematic. And finally, cleaning this thing is not fun. Almost less fun than cleaning a big pot of oil. How ironic is that?

Have you ever air-fried before? What did you make? Tell us about it in the comments!