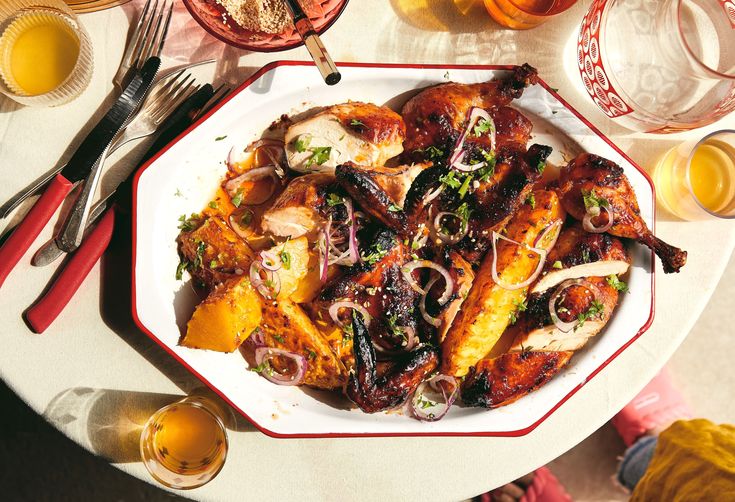 Alison Roman knows a thing (or 15) about going viral.

Consider her recipe for “The Stew”: an unassuming chickpea-turmeric concoction that amassed some 5,000 hashtagged shout-outs on Instagram (many of which made their way to Roman’s own feed, in screenshotted glory). And “The Chicken,” with 500-plus reviews, in just over a month.

Or take “The Cookies”—the salted chocolate chunk shortbread ones that arguably catalyzed Roman’s entrée to her current status as viral recipe whisperer, worlds over. (Smitten Kitchen suggested they just might be “the cookie of the year.” The Cut completely fumbled them, in a charming way. And The New York Times captioned a photo of them: “Those Viral Cookies You Saw On Instagram 487 Times Then Decided To Try For Yourself And Then Discovered That Yes, They Are Actually That Good.”)

Said capital-C Cookies come from Roman’s first cookbook, Dining In, published two years back. It became an instant hit, not just for its salted shortbread rounds, but for its many sophisticated-yet-effortless showstoppers, and the sort of crispy, creamy, vinegared fare home cooks can’t stop making and eating. With Dining In and in the years she spent prior developing popular recipes at Bon Appétit, Roman created the blueprint for how to be a food celebrity in the Instagram age. (It seems to involve a golden ratio of undeniably bingeable flavors, recipe names so appealing that they’re practically NSFW, and image styling that’s equal parts approachable and aspirational.)

And now she’s back with her latest book, Nothing Fancy: Unfussy Food for Having People Over, out this week from Clarkson Potter. “It’s not entertaining. It’s having people over,” declares the jacketless book’s back cover in bold-faced text. It’s full of the sort of recipes that sound so good, one contemplates switching off any and all phones, calling in sick, and cooking through the bulk of them. Stuff like Tiny, Chocolatey Cookies, flecked with flaky salt, garlicky dips, and focaccia that tastes like it’s been proofing all night but that comes together in just a few hours.

So, which will be the first to achieve proper noun–level success?

“I’m absolutely the wrong person to ask,” she says. “Every time I guess, I’m wrong.”

Which makes a lot of sense, actually—because for Roman, it’s not about going viral at all.

“I don’t want to be trendy, or flash-in-the-pan,” she says. “I want to be making things people incorporate into their lives forever.”

She’s been thrilled to see The Stew making another lap around the internet as temperatures cool, like an edible “It’s Decorative Gourd Season, Motherfuckers.” Roman enthusiasts are declaring it “stew season.”

“I hope they make it every year for the rest of their lives,” she says. “Having things that are truly good enough to stand the test of time is exactly my goal. I’m playing the long game.”

For those home cooks with similar ambitions, here are three recipes from Nothing Fancy we think have similarly serious staying power:

Roman would ascribe this chicken the yearbook-style superlative, “Least Likely to Be in One of My Cookbooks.” She doesn’t typically like fruit with her chicken, or too much sweetness in her savory food. But this dish—loosely inspired by her inability to stop thinking about tacos al pastor—“is so, so good, I’m willing to overlook my own rules,” she says.

This giant pot of carbs is so simple to throw together, Roman says she had to ask herself whether it was worth including in the book at all. “But it’s so good. Every time I ate it, I was like, ‘It’s so good. People will enjoy it,’” she says. “It’s something I make all the time for people. For me, a recipe like this is more about the idea that we should be making a big pot of pasta with stuff in it, and don’t fuss too much over it.”

“I did a version of this at Bon Appétit a million years ago,” says Roman. “I was glad I was given the opportunity to revisit and tweak it for the better.” The resulting edition in Nothing Fancy is exceedingly chocolatey—the original was inspired by Richard Sax’s Cloud Cake—with lots of body, and in a happy accident, turns out to be gluten-free. Roman writes in the headnote: “I would never call this a gluten-free cake, lest the gluten lovers feel like they are missing out on something potentially better (there isn’t).”

Which Nothing Fancy recipe are you excited to tackle first? Let us know in the comments!
Source